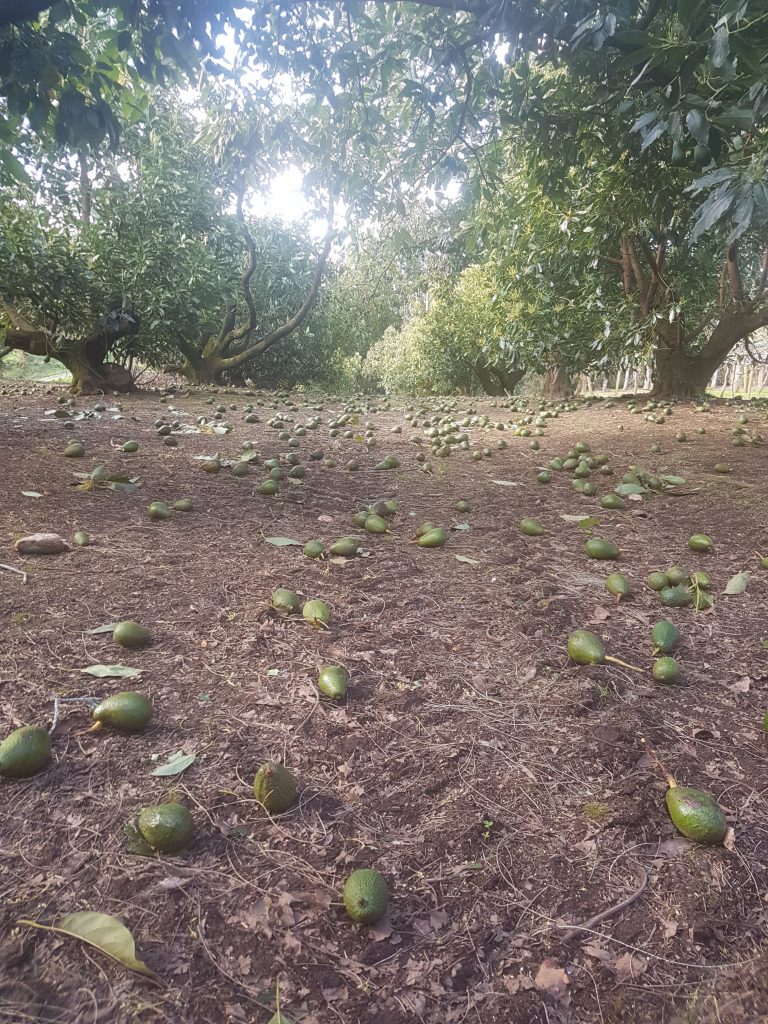 New Zealand has been hit hard by high winds over the past week which has impacted some avocado orchards. I have put together the following pointers for what to look out for and what actions to take to tidy things up on the orchard and ensure your trees are supported if they have become stressed. There has also been a sharp drop in temperature this week so have included a suggestion for supporting the tree through this as well.

Autumn means fast moving weather systems, with a sprinkling of snow, gales,heavy rain and thunderstorms. A series of fronts continue to affect New Zealand, with another fast-moving system racing up the country on Thursday, followed by a brief ridge before the next front arrives on Sunday. MetService is not expecting a repeat of the conditions experienced in Auckland and Taranaki yesterday, but elements of severe weather will still affect many parts of New Zealand for the coming days.

“It is imperative to be prepared in New Zealand, especially during periods of highly changeable weather,” explained meteorologist Tom Adams. “MetService is the official producer of Severe Weather Warnings and Watches  in New Zealand, and is the place to go to find out about the weather in the  days before it occurs.”

Thursday’s front will bring thunderstorms back to Auckland and Northland in the evening, and heavy rain and strong winds gusts will accompany these.   Behind the front strong southerlies pick up again, which will be strong and  gusty through Auckland. The southerly winds will maintain the cooler  temperatures, which persist through to Sunday when warmer air sweeps over  New Zealand again.  During these cooler nights, there are also many places  that will see frost, especially in sheltered inland locations.

The weekend is also looking unsettled, with a chance of more thunderstorms,gusty winds and showery rain.  There will be fine spells too as a  short-lived ridge moves over the country, but during clear nights watch out  for frost and ice on the roads.

Outbreaks of heavy thundery rain for Auckland, Coromandel Peninsula, Waikato and western Bay of Plenty tonight and during Saturday.
Issued by MetService at 8:38am Friday 13-Apr-2018

A front over the Tasman Sea is moving eastwards and will bring rain with heavy and possibly thundery falls to parts of the North Island. The most intense rainfall, and the highest rainfall accumulations, is expected to affect Auckland (mainly south of the city), Coromandel Peninsula, Waikato, and Bay of Plenty West of Tauranga.

Fruit on ground:
Any fruit left whole on the ground poses a health and safety risk to both you and your contractors. Fruit rotting on the ground will increase fungal innoculum that can impact the quality of the crop on your trees.  To ensure good sanitation practices, this fruit should be removed from the orchard floor.

Broken limbs:
Broken or damaged limbs need to be removed from the tree as they pose a health and safety risk, block effective machinery access and there is potential for secondary rots.

Make a clean cut where the branch has broken and either remove entirely from the orchard floor or chip and mulch back under trees.

Remaining limbs newly exposed to the sun are now at risk of sunburn damage and should be white washed for protection.

Irrigation:
Trees have a higher transpiration rate during periods of wind and there is greater drying out of the soil. Check your soil moisture levels and adjust irrigation accordingly. Do not irrigate during a high wind event.

Herbicide and chemical spray:
A reminder that sprays should not be applied during windy conditions.

To assist the tree through this period of stress, you can apply products high in amino acids. I recommend a foliar spray as soon as possible using Wuxal Amino combined with Wuxal Ascofol OR Enhance combined with Kelp Treat (GROlogic products) OR Megafol.

Let us know if you have any questions about the above or if we can assist with anything on orchard.