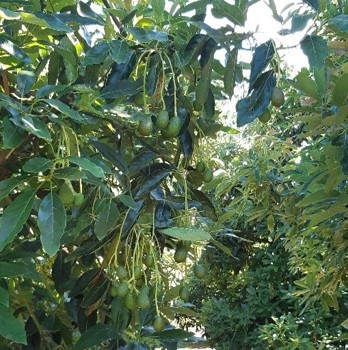 It can be extremely frustrating for a grower who feels they are doing everything possible to ensure good tree health and optimum production, to then experience poor fruit set. We know that there are various factors that affect fertilisation and fruit set, namely:

The list goes on and on – some of these we can control and others we can’t. So, if we are ticking all the boxes we can control, why do we get poor fruit set, cuking or excessive fruitlet drop? And why does this manifest in some trees within the same orchard and not others, or in neighbouring blocks or orchards?

On the whole, fruit set is looking really good this season, with good volumes and fruitlets sizing nicely. Currently, some fruitlet drop is being experienced which is normal for this time of year and expectedly more so on really heavy-set trees or trees experiencing moisture stress in this hot, dry weather in orchards without irrigation.

However, there are a few growers that I am aware of that have experienced the frustration of poor fruit set or cuking.

These orchards, which are all in close proximity, are all on completely different fertiliser programmes, harvested at different times and have had their bees brought in at different times as well. Temperature is to blame you may surmise, yet there are some trees within the same block or in neighbouring blocks that have set fruit and experienced the same abiotic influence. What makes this even more interesting (or you may think more frustrating), is that on one particular orchard two blocks that are in the cooler, lower areas and were frosted last season are the only blocks to set perfectly normally this season. The rest of the orchard had minimal to no fruit set on the trees. Why did the two blocks that were previously frosted and located in the lower areas set fruit and not the neighbouring blocks slightly higher up?

The differences were 1) the crop load on these two blocks was minimal due to the previous season’s frost and 2) their first stages of open-flower was most likely later than the other blocks that haven’t set successfully. Flowering is usually seen to start earlier in the warmer areas of orchards. We know that the earlier stages of flowering set better than the later stages and that ovule viability can decline from around 70% in early flowering to near 10% at the later stages and that these are the ones most likely to drop. If these two blocks were in the earlier flowering stage at the same time, most of the other blocks were towards the end of their flowering; could we deduce that there was an abiotic influence that was more favourable for fruit set at this particular time? Could the other blocks have experienced dips in temperature, delaying the female opening stage into the late afternoon or evening when pollinators were not active?

No research globally is yet to definitively provide the answers to this conundrum. I think researchers can agree that there is not one determining factor but myriad factors that interact and can contribute to this phenomenon. The avocado industry is still in its infancy and the more we learn, the more we realise how little we actually know about this crop and how much there still is to learn. As the industry grows and ages, and more money goes into research, we will grow wiser. But as growers, what can we do until we have those answers? We can observe and take note and hopefully provide some insight and answers for when incidences like this occur or to provide answers for the future.

Many growers see flowers on their trees but don’t actually observe them more closely and are often not aware at what percentage open flower stage they are in. Is an “on” tree at a different flowering stage than a neighbouring “off” tree? What are the minimum and maximum temperatures at the different stages? At what time of day are the male and female phases functioning? How active are the pollinators and are they coinciding with the female phase? What is the crop load? Is the crop still on or has it already been harvested? What type of weather is occurring over pollination and fruit set?