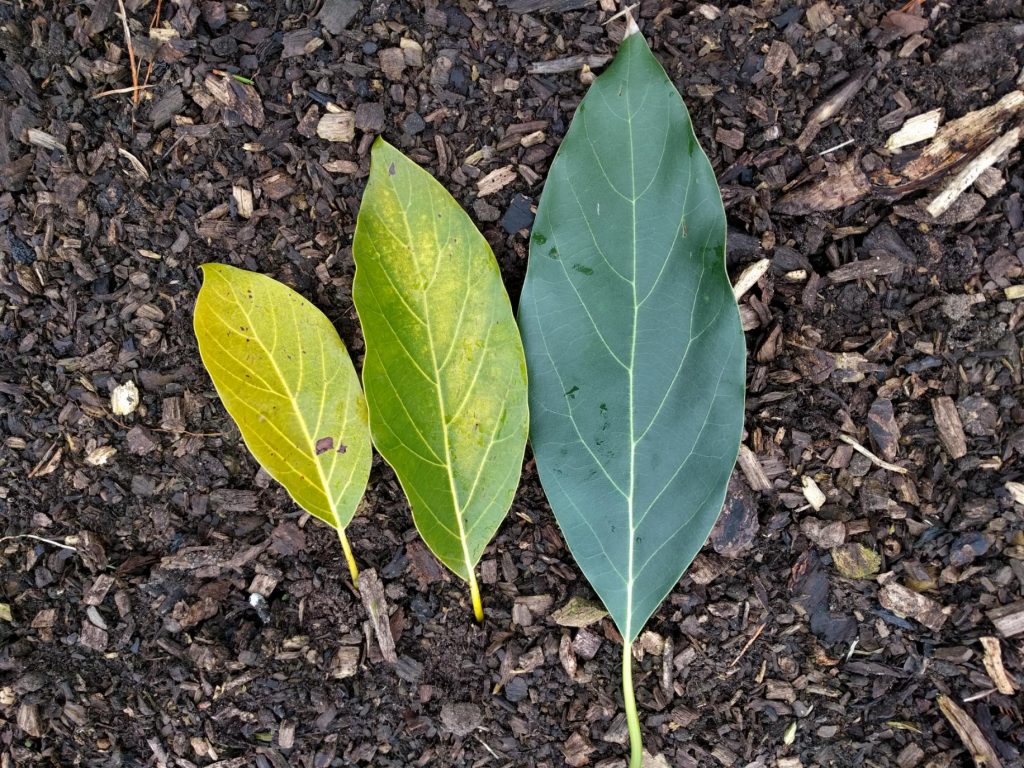 A number of growers have expressed an interest in gaining a deeper understanding of plant nutrition so in this newsletter issue I’ll be kicking off a nutrition series with Nitrogen.

As we go into this period of flowering and fruit set, nitrogen management is critical. This is the time where correct timing and rates have the biggest impact!

Nitrogen is one of the most abundant elements on Earth and is an essential nutrient for plant growth and reproduction. However, despite its abundance much of the nitrogen in soil is not readily available to plants. The sources of nitrogen, what it is required for, as well as the application rates and timing are often misunderstood. As a result of this confusion, nitrogen has become the most misused of all the essential plant nutrients.

Nitrogen is classed as a primary or macro nutrient together with Carbon, Hydrogen, Oxygen, Phosphorus, Potassium, Calcium, Magnesium and Sulphur.

FUNCTIONS OF NITROGEN
In plants, nitrogen is essential for plant reproduction, cell division and growth. It is the main component, found in the green pigment called chlorophyll, which is needed for photosynthesis, the most important of all the plant processes, which converts the sun’s energy into carbohydrates. It is also needed for the formation of amino acids (the building blocks of proteins) as well as DNA and RNA, which is the genetic material that allows cells (and eventually, plants) to grow and reproduce.

THE NITROGEN CYCLE
Nitrogen can cycle between the soil, the plant and the atmosphere. These transformations are often grouped into a system called the nitrogen cycle. A basic understanding of the nitrogen cycle is necessary in order to understand the management of nitrogen and nitrogen fertiliser application.

As most of these processes are conducted by microorganisms, it follows that ensuring a prolific and balanced microorganism population and a healthy soil environment for them, is important for optimum nitrogen efficiency.

The nitrogen cycle contains several routes by which plant-available nitrogen can be lost from the soil. Significant losses occur through denitrification, volatilization, crop removal and leaching. Nitrate-nitrogen is usually more subject to leaching than ammonium-nitrogen. 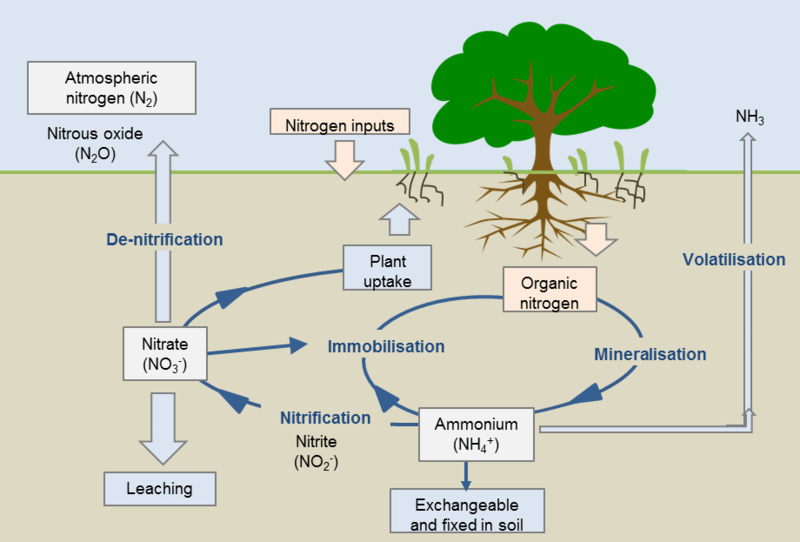 FORMS OF NITROGEN
Atmospheric Nitrogen: The air we breathe contains almost 79% nitrogen. Atmospheric nitrogen is a major source of nitrogen in soils. In the atmosphere, it exists in the very inert N2 form and must be converted before it becomes useful in the soil by nitrogen-fixing bacteria. For example, Rhizobium bacteria form a symbiotic association in the root nodules of legume plants. The plant supplies the Rhizobia with carbohydrate in exchange for the soluble Nitrogen “fixed” by the bacteria from the atmospheric N2.

In New Zealand, fixation by Rhizobia associated with clover is the dominant biological fixation process.

Organic Nitrogen: About 95% of the potentially available nitrogen in the soil is in organic forms, either in plant and animal residues, in the relatively stable soil organic matter, or in living soil organisms, mainly microbes such as bacteria. This nitrogen is not directly available to plants, but some is converted to available forms by microorganisms. Organic matter traps residual Nitrogen present in the soil and prevent its losses. It is also stored and released by organic matter in the soil as it decomposes, and then reverts to plant-available nitrogen.

Inorganic/Mineral Nitrogen: The majority of plant-available nitrogen that we rely on is in the inorganic forms of ammonium nitrogen and nitrate nitrogen (sometimes called mineral nitrogen). If any preference exists, it is usually for ammonium early and nitrate late in the growing season.

Research has shown that growth is optimized with a mixture of both ammonia and nitrate, with ammonium used preferentially

for synthesis of amino acids and proteins. The ideal is an equal amount of each in a 1:1 ratio but soil type and conditions affect availability of each and the decision on which is better suited and when.

Ammonium ions bind to the soil’s negatively charged cation exchange complex (CEC) and behave much like other cations in the soil. Nitrate ions however do not bind to the soil solids because they carry negative charges and therefore exist dissolved in the soil water so are more readily available for plant uptake but leach easily beyond the root zone.

The ideal ratio between these two forms of nitrogen is different within the plant when compared to the soil.

In the leaf, a three-parts of ammonium nitrogen to one-part nitrate nitrogen is preferred. This different ratio in the leaf is partially related to an inflow of ammonium nitrogen from the atmosphere, directly into the leaf, via
nitrogen-fixing organisms living on the leaf surface. Nitrogen-fixing organisms in the soil also constantly boost the ammonium component within the plant. This key 3:1 ratio between ammonium and nitrate nitrogen in the plant is a really important, but often overlooked element in plant health and resilience. This ratio is often inverted and the excess nitrate in the leaf results in high insect and disease pressure.

The nitrogen in fertiliser applied from a bag actually accounts for much less than half of the nitrogen used to produce a crop, so it is important to manage the nitrogen cycle efficiently.

The forms of nitrogen fertiliser widely used today are used because they’re easy to source in large quantities and are relatively cheap. They’ve been designed by chemists rather than biologists and haven’t had the crop’s physiology in mind. As a result, fertiliser uptake by plants is an inefficient process, with rates of recovery for nitrogen fertilisers in the region of only 25-35%!

We assume that most of our crop’s nitrogen requirements come from a bag, but this is not the case. A large percentage of the nitrogen utilised in crop production is supplied by biology and by understanding this, we can optimise our nitrogen supply and efficiencies.

Globally, proactive companies and growers are coming to rely more on organic forms of nitrogen rather than the conventional inorganic with very rewarding results.

Transport of Nitrogen from roots to shoots takes place in the xylem, while Nitrogen partitioning and remobilisation from source leaves to sinks occurs in the phloem. Sink organs generally display little xylem import as a result of their low transpiration rates. Simply put, this means that organs such as flowers or fruit or new vegetative flush pull or sink Nitrogen from older leaves which can become deficient and even abscise. You will therefore notice Nitrogen deficiency symptoms on old leaves first.

The significance of this is that Nitrogen reserves that are built up in the previous year are used to support early growth in the following spring. It also means that leaves are an important additional sink of Nitrogen during winter and that the remobilisation of internal Nitrogen reserves are therefore crucial for optimal shoot growth, flowering, and fruit set since bud break occurs when conditions (end of winter) are not optimal for root Nitrogen uptake.

Maintaining good winter leaf health and nutrition is important – do leaf sampling for accurate nutritional status of these leaves.

OBSERVING NITROGEN DEFICIENCY
The reduction of chlorophyll caused by nitrogen deficiency leads to a loss of colour in the leaves. In the early stages a slight fading of normal colour and slight retardation of shoot elongation occurs. Later stages show uniform loss of colour. The dark green leaves turn light green to yellow. Foliage is sparse and leaves are smaller. Lack of vegetative growth, lower yields and premature defoliation can be experienced.

WAYS TO IMPROVE NITROGEN MANAGEMENT
Several orchard management practices can be implemented to improve both nitrogen efficiencies and tree performance. They include:

WAYS TO IMPROVE NITROGEN MANAGEMENT
Several orchard management practices can be implemented to improve both nitrogen efficiencies and tree performance. They include:

IMPORTANCE OF FOLIAR NITROGEN
Foliar applications of nitrogen can be useful in the following conditions:

Remember though that the rates and timing of foliar applications are critical and should be recommended by your advisor.

TOO MUCH OF A GOOD THING
While it is always important to ensure sufficient nitrogen supply for optimum performance and yield, it is equally important that we do not assume that, more is better (especially for all my ex-dairy farmers out there). Nitrogen is the nutrient most often abused in terms of this ‘more-on’ approach. Excess nitrogen can cause a multitude of problems.

The second major mineral affected by too much nitrogen is calcium. Reducing the cell-strengthening potential of calcium will negatively impact not only disease resistance but also fruit quality and shelf life. Boron uptake will also be affected thereby affecting optimal fertilisation after pollination.

Excess Nitrogen also results in an increase in fruitlet drop from November to February as well as mummified fruit that remain hanging on the trees.

that energy for flower growth is redirected to foliage proliferation rather than production. In extreme cases this can result in no or very little crop.

Root stress
The energy used for this large leaf growth also stifles the root system below. The roots slow their naturally spreading habit since they do not have the necessary nutrients to use as energy as it is being redirected upward. Additionally, stressed roots invite disease through soil pathogens as well.

Compromised immunity response
Nitrate nitrogen is always carried into the plant with water and there is an associated dilution factor involved. High nitrate nitrogen always spells low mineralisation because of this dilution effect. A broad spectrum of minerals is involved in the plant’s immune response and the levels are compromised by excess nitrates.

Leaching
Plants cannot absorb all the excess nitrogen in the soil and extra nitrogen levels will slowly leach out of the soil. As a result, groundwater and drinking water become contaminated from the nitrate levels.

When irrigating from ground water remember to get your water tested for nitrate levels as this will have an effect on your nitrogen fertiliser application.

Nitrogen management plays a significant role in determining your bottom line so ensure you manage this nutrient well in order to keep tree performance, production and fruit quality up as well as costs down.