NEWS FROM THE NORTH

Te Tai Tokerau Water project
It is with a certain degree of interest and excitement that I am watching the start of an irrigation scheme going in, for the Kaipara District, near Dargaville.

“Te Tai Tokerau Water Trust was created in mid-2020 to initiate water storage and distribution schemes in two areas in Northland that have high quality soils, and therefore horticultural potential. These areas are near Kaikohe in the Mid North and on the northern Pouto peninsula south of Dargaville and will provide infrastructure to develop approximately 7000ha of new horticulture.
Consent has been issued for the new 270,000m³ Redhill water storage reservoir near Glinks Gully. Construction is underway and Redhill is expected to be operational before the end of 2021. Stage two of Redhill is expected to be enlarged to 3.2 million m³. The reservoir is the first step in what is hoped to be a larger Kaipara water storage and distribution scheme which could ultimately support up to 1000 hectares of new horticultural development in the region within two years.”

“Those who wished to gain access to the water could buy shares in the schemes from the Trust. It is envisioned that both water schemes would ultimately be owned and operated by shareholders. Water companies for each region were currently being created by the Trust for this purpose.

The scheme design would collect water from natural sources like streams in times of high flows through pumping systems and gravity. The water would then be stored in the newly created reservoirs and distributed through a network of pipes in times of need.”

Andrew Cutfield and I have already spoken to a group of farmers in the area who are considering horticultural developments on part of their farms. The Trust that is behind the project purchased 350 hectares of land to put the first dam on.   Parcels of this land are able to be purchased, and to date 100 ha has been sold with the intention of planting avocados.

The area would be suitable for avocados, kiwifruit, citrus and blue berries.

The other development near Kaikohe is probably more suited to citrus and kiwifruit as it is higher in elevation and colder in the winter.

Health and Safety
As the new season of harvest is drawing closer it is a good time to review Health and Safety on your orchard. Over the past few weeks, I have been on a large-scale orchard regularly. I must sign in either with the book or on the Onside app.

The app sends a notification immediately to the orchard manager that I am on the property. They receive a notification when I exit the property as well. The whole orchard is deemed “hi Viz” so whilst collecting fruit I wear a hi Viz vest. All the staff wear them as well. Staff also wear the appropriate crash helmets when driving quads and side by side type vehicles. It is great to see an orchard operation taking Health and Safety seriously and 100% buy in by the staff.

Fruit Maturity testing
Fruit maturity testing is in full swing, with values swinging around a bit with some recent wetter and colder weather. I have been using both the destructive dehydrator test, and the portable Felix machine to keep a check on both sampling methods. The more I use the Felix machine the more familiar I am becoming with its functionality. I think that by next season, pre Eurofins testing will be carried out by portable machines, therefore having to do away with the slower dehydrator method.  I am working through client requests for dry matter testing at the moment so please contact me if you are requiring sampling. 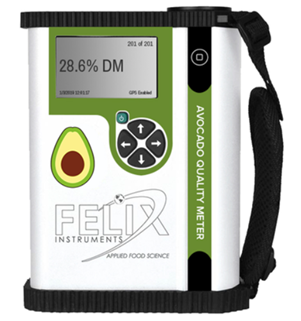