Home Blog ORCHARD MANAGEMENT: TO CUKE OR NOT TO CUKE? 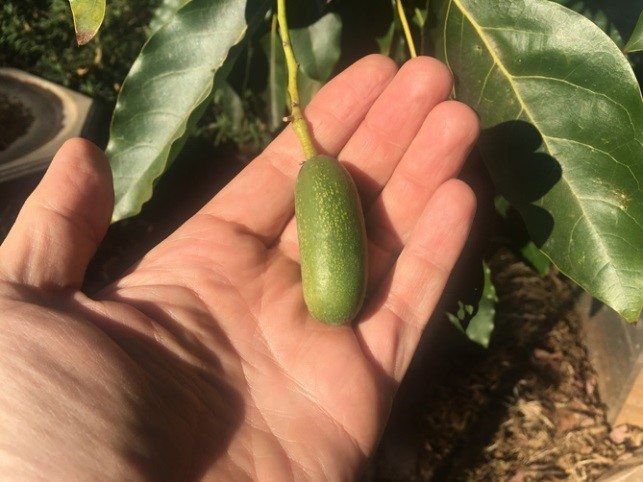 ORCHARD MANAGEMENT: TO CUKE OR NOT TO CUKE?

Avocados belong to a very small group of plants called basal angiosperms which are of the most primitive flowering plants, traced back in evolution to the earliest seed plants. It is no wonder that they waste immense energy and resources on up to millions of flowers adding almost 9% biomass to the tree for most of them to fall off resulting in a very poor flower to fruit ratio. Just when we think we have the worries of fruit set behind us, we are faced with another hurdle as we watch some of the developing fruit turn into seedless avocados aka cukes!

WHAT IS A CUKE?
Botanically, there are two main reasons for the formation of seedless fruit:

In both cases the plant must be able to continue to sustain the development of the fruit in the absence of seed formation.

Fruit development is controlled by carbohydrates, sugars and phytohormones (auxins, gibberellins & cytokinins). In the instance of cukes, instead of these resources being supplied by the developing seed, or the tree itself, it is the mesocarp of the young fruitlet that is supplying sufficient hormones for the fruitlet to “hold on” and develop into a seedless fruit.

That explains what a cuke is and how it forms, but what causes it, is a lot more ambiguous! Surprisingly there is little research and none very conclusive into the phenomenon of the seedless avocado. After copious research, on orchard observations and past experience, I have come to my own conclusions.

WHAT CAUSES A CUKE?
With fluctuating periods of minimum temperatures during the long flowering period, we get waves of fruit set resulting in a range of avocado fruitlet sizes. The more erratic the temperature, the more inconsistent the fruit sizing.

Whether a fruit aborts or matures depends on its ability to chemically inhibit neighbouring fruit or on its sink strength.

An antagonistic coevolution can occur between the embryos when their seed sizes differ, to take control over resource allocation. High metabolic activity of the developing embryo and endosperm in the first  wave of fruit set and the consequent production of phytohormones in these tissues create strong sinks for resources.

Research also suggests that starch reserves in the ovary play a significant role in the reproductive process in avocados. The relationship between starch content in the ovary and the fate of the ovary support the hypothesis that different levels of carbohydrate reserves in different flowers are related to the success of subsequent fruitlet development.

Auxins and gibberellins produced during pollen-tube growth stimulate the initiation of fruit development. In order to maintain fruit development however, the endosperm needs to provide nutrition in the form of starch as well as a source of auxins, gibberellins and cytokinins. The endosperm is the tissue produced inside the seed, surrounding, nourishing and protecting the embryo.

When the endosperm is starved of resources due to either the sink strength of the first fruit set or the low carbohydrate reserves initially of the ovary; the formation of this tissue is affected at an early stage, and embryo development ceases. These fruitlets with abortive seeds are now no longer nourished by the seed but by small amounts of phytohormones and resources found in the mesocarp and continue to develop into seedless avocados or what we call cukes.

Do I think there is anything we can do to prevent the occurrence of seedless avocados? Perhaps stimulating more uniform and delayed flowering through the use of plant growth regulator sprays is the answer.

What is clear though, is that we need a lot more insight and understanding into the genetic regulation or hormonal signalling of fruit development in this basal angiosperm called the avocado. We have only begun to scratch the surface!

Just maybe we should be thinking the other way around – what can we do to stimulate and develop the seedless avocado!

Introducing the avocado you never knew you needed. Our new cocktail avocados don’t have a stone and are completely edible (yes including the skin) In stores now in limited supply.